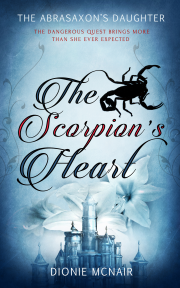 Book 1 in the The Abrasaxon’s Daughter series

The dangerous quest to find her father and fix her shattered world brings Brianna more than she ever expected.

Brianna is determined to elicit help from her elusive Abrasaxon father, Hakon, to conquer the evil Tyban, Zelig, who has invaded her world. But her journey to the Crystal Castle is full of perils that she and her newfound companions are ill equipped to overcome. Danger comes in many forms—tiny vengeful Nixets, a resurrected Yabix and ruthless Tyban who have crossed into the mortal world.

As they surmount each challenge, Brianna wonders if she will ever get control of her newly blossoming—and daunting—magical abilities, and how to handle her growing attraction to her new companion, Amon. Her resentment toward her father for failing to prepare her for the inheritance of her ‘gift’ flares again when a young woman they save from death, Issah, claims to be her sister. But there is no time for ill feeling with the heart of the Abrasaxon existence, the Crystal Castle, dying, and Hakon and his fellow Direktorate members missing. The two girls combine their untested magical abilities to rescue their father and save the twin lands of Okana and Okiyarra from destruction.

Reader Advisory: This book contains themes of enslavement and scenes of mind control and violence.

Publisher's Note: This book was previously released elsewhere. It has been revised and re-edited for re-release with Finch Books.

Brianna paused at the top of the steep track scarcely long enough to catch her breath and check that the anjoa fruit had survived her hurried climb intact. A sense of pride flashed through her as she lifted the concealing cloth. The two oval fruit were the biggest and most beautiful specimens she had ever seen. The green skin of both was smooth and shiny—not a blemish in sight. They would be her offering for the Luna Goddess’ table in the temple tomorrow night.

With reverent care, Brianna covered them again, and clutching the wicker basket close to her chest, she hurried through the orchard.

A sharp slice of stinging pain cut across her ankle. Her foot jerked out from under her and she toppled forward, the basket flying out of her grip. Her face slammed into the dirt. The air in her lungs rushed out with the impact.

“Oww,” she croaked as she lifted her head and gasped for air.

Her basket rested on its side only inches in front of her, but both of her anjoa fruit had rolled away. “No,” she cried and pushed herself to her knees as the biggest wobbled across the last inches of grass and slammed into the rock cairn marking the border of the orchard. It split open, the sweet red flesh torn into ragged chunks, juice and black seeds splattering the grass in a wide circle.

“My offering, oh my beautiful offering,” Brianna howled as tears blurred her vision.

Somebody snickered. She turned toward the sound. Conal stood legs apart, arms crossed. At his feet lay the second anjoa fruit, still intact. Behind him waited the four boys who made up his bevy—the rich kids, Tobin, Kedem, Fabron and Rayan.

She climbed to her feet. One ankle was entangled in a grubby piece of rope. Unease stabbed through her.

“Well, I still have one,” she replied, stepping forward to retrieve the fruit.

Conal rested his foot on it, very gently. “No you don’t.”

“Because it’s mine. I brought them all the way from the forest,” Brianna replied.

Conal scowled in the direction of the smashed fruit. “But you didn’t take care of your gift for the Luna Godess, did you?”

“I would have, if you hadn’t tripped me,” she shouted, flinging the rope in his direction.

Rage burned a fiery path through her veins, melting her self-control into stinging sparks inside her gut. She glared at Conal. “Give it back,” she said.

“I don’t think so, peasant. The boys and I will take the surviving anjoa to the temple. Clearly you can’t be trusted with the task,” Conal scoffed.

A searing pain wrenched inside her, as if something had broken. She winced but kept her gaze on Conal, trying desperately to hold down the tight pressure threatening to overcome her. “Give it back,” she bit out between clenched teeth. Something was wrong. A writhing, spiny ball of wrath twisted her stomach and she could hardly breathe.

Conal slowly bent down and scooped up the anjoa fruit. He cradled it in his arms and stared at her. “You appear mighty mad and all red in the face, Brianna. But you can’t make me give it back.”

His taunt stoked her rage. Brianna gasped at the painful implosion as her gut twisted, her lungs compacted and her hands sizzled and flexed with lives of their own. She trembled in a desperate attempt to hold the seething fury inside, but it was too big for her, rampaging with uncontrolled violence. Oh raving hojaks, what was happening to her? The power built until without warning it spurted from her clenched fists in a shimmering, pulsing stream that sprayed directly at the jeering boy.

The translucent force hit Conal in the chest, lifted him off the ground, threw him backward then dumped him on his knees in the dust. The anjoa fruit jumped out of his grip and floated in the air, twisting and turning several times before it landed with a soft plop by Brianna’s shoes.

The four boys gaped as Conal very cautiously climbed to his feet and dusted himself off. The energy drained out of Brianna as she stared aghast at Conal. Oh moonbeams, had she done that?

“Run. Everyone run. Brianna’s bedeviled by a Tyban. Run for your lives,” Conal yelled.

The five boys fled, their screams piercing the air in terror-stricken gashes.

Brianna stood frozen, uncertainty swept over her in undulating waves and she swallowed hard on the surge of nausea that swirled in her stomach. She sagged onto a tree stump and covered her face with her hands. Oh fiery moonlight, moonbeams and luna darkness. What was wrong with her? Bedeviled? Oh dear Luna Goddess, no. Tremors raged through her. Her teeth clattered and she was so cold. The anjoa fruit she had fought to recover sat forgotten at her feet as she hunched protectively in on herself.

A light touch on her shoulder was enough to manifest her terror. She screeched and spun around, ready to defend herself.

“Come away into the house, daughter. There has been enough spectacle today to set tongues wagging from here to Okiyarra.”

Her mother’s grip on her shoulders, urging her toward the house, was forceful.

“But something happened… I felled Conal. I was so angry and it just happened.”

Her mother guided her through the doorway and slammed the door shut. “I know, Brianna, because I’ve been expecting it.”

Brianna pushed away from her mother and looked up into her eyes. What she saw reflected there ballooned her uneasiness into real terror. “Expecting what?”

“Sit, Brianna, and I will explain.”

Dionie was a closet writer for several years before she got brave enough to share her work with anyone, until she joined Eyre Writers Inc, a creative writing group in the seaside town of Port Lincoln and really began to improve.

Her first book was a 100,000 words family saga novel but after studying children’s literature at university she embarked on a new direction—writing a young adult fantasy novel.

After being made redundant from the job she loved in 2011 she became a carer for her frail, vision-impaired mother and turned to fulfilling her dream of becoming a writer.

When Dionie is not writing she enjoys spending time with family and friends, especially her mother and three wonderful adult children and adorable grandchildren. She also enjoys egg decorating and carving, reading of course, painting, gardening and cooking.

There are no reviews for this title yet, be the first to write one.

Share what you thought about The Scorpion's Heart PRINT and earn reward points.

Other books in the The Abrasaxon’s Daughter seriesView Series Page