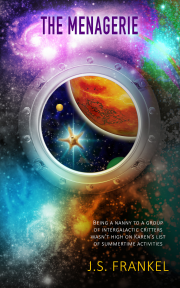 Taking care of a pet is one thing, but when orphaned teenager Karen Fox is kidnapped to service an interstellar zoo, she gets more than she bargained for.

We do this for they bring us happiness.

We do this because they have no defense, nowhere else to go and no one to care for them.

We do this in order so that they may teach us what it means to be different, and for us to embrace that difference.

Karen Fox, sixteen and recovering from a terrible car crash that claimed the lives of her parents, dreams only of becoming physically able once more. Hearing a strange voice that comes from somewhere near her hospital, she investigates and is kidnapped by an automated ship transporting interstellar animals to a safe haven. Knowing nothing about how to take care of them and disliking animals to begin with, Karen learns the value of caring for interstellar life. And when a marauding band of poachers attacks the vessel, intending to seize all the animals, Karen is forced to fight for her own life as well as the animals she has come to care for.

Karen Fox rubbed her right leg—the bad one—sighed, and figured that she might as well get out of bed. Hospital beds weren’t all that comfortable, so she turned over onto her left side, slid out of bed and stood up. She gripped the cool tiles with her toes while she teetered unsteadily for a moment. Once she regained her balance, she limped over to the window. Scents of summer—fir and pine trees, hollyhocks and azaleas—drifted in through the window along with the sounds of shouting. She muttered, “It would be a nice day today.”

Today was the middle of July, the time was around noon, and although the Portland weather was hot and dry, a cool breeze swirled around her. It was different from the air conditioner. It was natural and pleasant, whereas the air-conditioning unit put out a steady stream of dry air that made her cough. Pleasant or not, it didn’t matter. Instead, she shifted her gaze to the sky and prayed for rain.

Since being brought here roughly two months ago, Karen had grown to despise sunny days and hate the summer season. What she hated more than anything was the idea of people going around in shorts and tank tops and riding bikes and everything else sixteen-year-old kids did when they were fully capable.

Now, all the fun of life had been taken away and she just wished—selfishly so—for it to rain and dampen everyone else’s fun. Let Mother Nature do her worst and not just rain but storm. Bring on a flood, a volcanic explosion or something else equally dire. If she couldn’t enjoy life, why should they?

“Don’t be selfish,” she whispered a second later, and took back her wish. Thinking about it, it was just plain mean. Even if life didn’t work the way she wanted it to, she couldn’t go around blaming anyone for what had happened. Part of her said that it would be fun. Everyone deserved a little misery in their lives. However, the other part, the rational and decent part, said no.

The question floated up to Karen’s position, and she followed the source. There, a few people she knew from her school rode by and she moved away from the window, flattening her back against the wall. Doubtful they saw her, as she was on the second floor, and who looked up while riding along, anyway?

After sneaking a peek, she saw their bicycles disappear down the road and breathed a faint sigh of relief. The breeze blew some strands of her long, dirty blonde hair around her face and she brushed them away with an impatient flick of her hand.

Letting out a series of grunts as she moved back to the bed, she winced with every step. The accident had been a bad one. She’d been in the back seat of her father’s car, enjoying the ride and then…then the bright light had come from the onrushing car. She’d heard her mother screaming, her father yelling “Get down!” and the sound of metal being crushed…

May fifteenth, two months ago

“You’ve had an accident,” one of the nurses told her in a kindly voice. A middle-aged woman, heavy with a tangle of dyed black hair, she wore a strained smile.

Karen’s first words…accident victims always said that, didn’t they? This had been her first real accident. Biking and running and roller skating had always been part of her life. Bruised knees and elbows came with it, but now, this was major, so she asked the obvious question.

The lights in the room were dim and shadows lurked in every corner. Moonlight came through the drawn shades. A smell of antiseptic hung in the cool air and stabs of pain lanced through every fiber of her being. Her right leg hurt and had a heavy cast on it, suspended by a sling that hung from a support bar attached to the bed. Thick bandages had been wrapped around her right forearm. An intravenous tube ran from a bag in an overhead support and fed into the vein in her right arm.

She didn’t take much note of that, though. Instead, she focused on the pain. Her right cheek hurt monstrously, and bringing her good arm up to feel her face, her fingers encountered more bandages.

“You were in a car accident,” the nurse gravely intoned. “You don’t remember it, do you?”

“Not much,” said Karen, struggling to think. “Where are my parents?”

Just two words, but they carried a lot of meaning, and the meaning knifed into Karen’s head with all the immediacy of a thunderbolt. A second later, the tears began. “I want to see them,” she sobbed out. “Where are they?”

As she struggled to get off the bed, the nurse gently pushed her back and said, somewhat reluctantly, “They’re…in the morgue. You just had an operation and you need to rest.”

“I want to see them!” Karen screamed and once more tried to get up, lashing out with her good arm. Her fist connected with the nurse’s cheek. She heard the nurse grunt then another nurse ran in, a needle at the ready. Karen felt it stab her arm then…nothing.

Waking up the next day, pain still there but somewhat more manageable, Karen noticed the sun streaming in and she felt a little stronger. The nurse whom she’d belted walked in with a massive bruise on her cheek, but a professional smile in place. “Are you feeling better?”

“Yes.” Karen nodded and mentally steeled herself for what she was going to ask and what she had to see. “I’m sorry about hitting you.”

The nurse inclined her head slightly. “You were upset. I understand.”

It was good that someone understood. “Can I…see my parents now?” Karen asked in a faint voice.

J.S. Frankel was born in Toronto, Canada, a good number of years ago and managed to scrape through the University of Toronto with a BA in English Literature.  In 1988 he moved to Japan and started teaching ESL to anyone who would listen to him. In 1997, he married the charming Akiko Koike and their union produced two sons, Kai and Ray. J.S. Frankel makes his home in Osaka where he teaches English by day and writes by night until the wee hours of the morning.

I love Frankel’s style I have read his books and always been taken out of myself and into the world that he paints with his words. A master at making you feel like you are there living in the ship...

I loved the adventure and the sense of discovery in the story. Plus the concepts of how animals should be treated, what constitutes enough care and where home is, are woven into the story story well....

Share what you thought about The Menagerie PRINT and earn reward points.