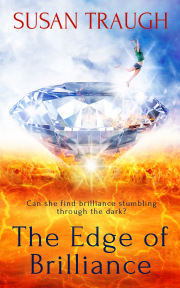 The Edge of Brilliance PRINT

Volatile and unstable, Amy stands at the precipice. Will she fall into the chaos and despair of insanity or ascend into brilliance and redemption?

Amy Miles is fifteen and crazy. Or at least that’s her greatest fear. Her severe bipolar disorder, with its roller-coaster manic and depressive episodes, is ruining her life. Yet in Amy’s mind it’s accepting the pills and therapy—not the disorder—that will brand her as ‘crazy’.

When Amy lands in a residential psychiatric program, she befriends take-charge Mallory, and the two create family as they try to salvage the shards of their broken minds. While there, Amy also discovers that her illicit drug use has robbed her of her ability to dance and she is forced to weigh how hard she’s willing to work to reclaim her lost talent and potential. But, despite a promising beginning, when Amy falls back into denial, the tragic consequences cannot be undone.

Amy is left to decide whether to give up altogether or to accept her diagnosis and the tools she needs to battle her disorder, to learn to dance again and to forge a new and improved version of herself. Will she step up to the edge of her brilliance and shine?

Reader Advisory: This book contains scenes of strong language, drug use, violence, suicide attempts, loss of autonomy, bullying and a brief scene of non-consensual sex. This book involves a frank exploration of mental illness from the viewpoint of a teenager with bipolar disorder.

Publisher’s Note: This story focuses on a US setting and displays an example of treatment that could be expected here in some circumstances. This does not reflect all cases and is not a comprehensive representation of treatment worldwide. This story is not intended to represent diagnosis or treatment suggestions.

Her wail reverberated off the tiled walls in a satisfying shriek. Drenched, enraged and prostrate, Amy reached her arms over her head as she lay fully clothed, sprawling half in, half out of the shower while steam roiled and the water splashed out of the open door and onto the floor.

“Manic,” her dad had said. As if it was his word. As if he had any right to it. Any right to use it. It was hers. Her word. Her nightmare. Her disease.

Everyone tried to make this mess more manageable with cheery advice and condescending platitudes. But it was a curse. A plague. A full-blown disaster. She didn’t deserve it and she’d wail at the wall if she wanted to.

Her therapist had once congratulated her on choosing the shower. He’d suggested cold water to cool her down and ease her manic episodes, so Amy purposely chose hot. Besides, the hot water mirrored her mood.

And yet, as the heat poured over her body, that rage seemed to seep out of her pores and flow down the drain with her tears. It was ending. She could feel the signs. But it was never raw rage into sublime peace. This trip to hell included a side trip through mortification and shame with a final destination of nothingness. And here it came again. After the volcano came the pit. Amy tried to hold on to her rage. As acidic as that fire burned, it was better than falling into the hole of despair that awaited her. For this was not the first time she’d locked herself away in fury. She just wanted it to be the last.

The rattle of the bathroom doorknob jolted Amy’s thoughts as her mother successfully forced the locked door with the back of a spoon…again.

“Get out!” Amy shrieked, mustering all the anger she could pull from her waterlogged body before her mother opened the bathroom door. But she knew her mother had heard the change in her cries. They’d danced this dance so often that Amy knew her mother could anticipate each step, and the truth was, part of her was glad for her mom to come and pull her back from the volcano’s pit.

“No,” said her mother in a tone that allowed no response. Mom slowly closed the door behind her and surveyed the damage. She sucked in a quick breath, stopped, then slowly blew it out as if she were blowing through a straw. In her fury, Amy had slammed the shower door against the towel rack on the wall, shattering the tempered glass within the frame. The pebbles of glass hung in a weblike pattern on the door, glistening with the spray of the shower and looking like a thousand diamonds.

“He called me crazy!” Amy yelled from the shower floor, a new wave of rage enveloping her.

“I don’t recall hearing him use that word,” replied her mom.

“What can he say, honey? What can any of us say when you’re like this?”

Amy threw the soap at the shower wall. “But don’t you get it? I don’t want to be like this!”

“I understand that. But you will be until you start taking your meds regularly.”

“I’m not crazy! I’m not taking meds for crazy people!”

“No one said you were crazy. Your father never used that word and never will. But you do have bipolar disorder. So your choice is to control your condition, or let the condition control you. We both know the choice you’re making now. How’s that working for you?”

While Amy wept, her mother stood staring at the wall. The steady pounding of the shower’s water was the only other sound in the room. As she cried, Amy wondered if her mother would ever speak again.

Amy’s words tumbled out as limp and water-laden as she was. “Your piece o’ crap, screwed-up daughter. Isn’t that what you want me to say?” And, despite herself, a new flood of angst escaped Amy’s throat. Not rage, but shame, pain and aching need raced out from her soul and echoed around the shower floor. Once released, her sobs seemed to have no limits. How could I do this again? Why couldn’t I just control myself? Everybody else seems to be able to get a grip—why am I such a freak-girl? People are actually afraid of me! Afraid of me! If they could only see me now, sobbing in the shower, slobbering down my cheek. Only the constant stream of water washes my river of snot away. Oh God, what a hot mess I am. What a piece o’ crap, hot mess.

“No, that’s definitely not what I want from you,” replied Mom, as if she had heard Amy’s thoughts. “I want a hopeful, dream-filled answer that will define your goals and pull your life forward. I don’t know how to help you find it, but it’s certainly not this way.”

Amy had no other answer and simply lay crying in the shower. The water had washed away all her rage. The mania was ending and depression’s grip was squeezing her throat. Amy knew her mom would help her. But she didn’t know why she—or anyone—should, as that voice of shame wrapped its bony fingers around her skull, taunting her, teasing her. You’re such a screw-up. You’re a burden on the family. Just disappear, asshole, and never burden your family again. Really. You know you understand why bipolar kids kill themselves. Wouldn’t that peace be nice? It would just be so much easier… Life would be so much easier if…

Mom reached up and turned off the water. She dropped a towel over the back of Amy’s shoulders. “Come on, get up,” she said as she slowly pulled her daughter to her feet. “Be careful not to touch the shower door or it might break all over you.”

Wordlessly, she began to dry Amy’s hair and face. Like a child, Amy sat on the toilet seat while her mom removed her shoes and socks then helped her discard her pants and shirt behind her towel-shield.

Amy walked out of the bathroom and toward her room in a zombie-like trance. As she passed, she glanced at the living room. Throw pillows were strewn all over the floor. The plaid easy chair was turned on its side and the flower arrangement sprinkled like confetti all over the rug.

“Clean it up,” her mother had said as the manic had begun. But Amy had only been able to destroy then. Now she could barely walk.

She stumbled into her room and fell onto her bed. Only when she had already lain down did she realize that her light was still on. Too tired to do anything about it, she simply threw her arm over her eyes and fell asleep. 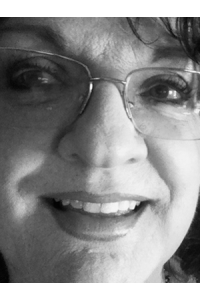 Susan Traugh is an award-winning author, wife and mother of three young adult children. For a decade she has been writing how-to guides for teens transitioning into adulthood, but when mental illness ravaged the life of one of her children, this book was born. Happily, both the book and the child have found their voice and their way.

Reviewed by Lisa B

Not knowing what this book was really about, I was quite surprised to find myself unable to put it down once I started it. It is beautifully written, often raw and gritty, but always real. To learn...

The author did a wonderful job at keeping things real, from the despair of the parents to the exhaustion of living with the disorder and not grasping the dire need to learn the tools in order to su...

Share what you thought about The Edge of Brilliance PRINT and earn reward points.