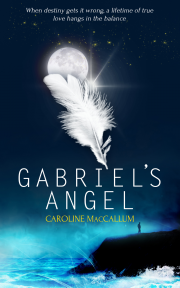 When destiny gets it wrong, a lifetime of true love hangs in the balance.

Gabriel Black doesn’t want to believe he’s been dumped, but when the texts, calls and sweetly scented letters from his long-distance girlfriend, Elle Cassidy, suddenly stop, what else can he think?

Just as well his family is starting a new life away from the rat race, which means he can find out what’s going on face to face. But when things don’t go to plan, he finds it hard to keep his cool. And when life gets downright creepy, Gabe’s hot temper quickly burns through his veins as he struggles to comprehend his situation.

When the dust settles, he learns that a twist of fate means he’ll have to navigate a new, never-before-trodden path if he’s to have Elle at his side. It’s not easy, danger lurks in the shadows and he has to fight to protect what’s his. But Gabriel and Elle have allies, the ghostly glow of the moonlight is their friend, family love provides breathtaking strength, and together they can face the future no matter how many soul-takers try to tear them apart.

“You’re dumped,” Becky said. “Face it, Gabe, when twenty texts a day stop, it can only mean one thing.”

Gabe knocked back the last mouthful of his can of Coke. He swelled his cheeks with fizz and scowled at the scenery flying past the car window.

“I mean, not just texts, but letters too. They came right up until four weeks ago and then zilch, nada, nothing, end of.” Becky touched her new nose stud with her index finger. “It’s obvious there’s a new bloke in her life and I’m afraid, Mr. Black, it isn’t you.”

“You don’t know that,” Gabe muttered. “Besides, I told her we’d be taking over the café at the beginning of September.” He frowned. “I’ve even got art A level to suffer now.”

“Girls are fickle.” Becky shrugged as if it were common knowledge about her gender. “And you hardly knew her, not really. It was a holiday fling, a week of romance in the spring. She’s probably met loads of new guys over the summer, you know…” Her eyes widened and a wicked grin tugged at her lips. “Surfers—tanned, muscled, charming smiles, sun-kissed hair, all ready to take her out and stun her with daring tales from the sea… How could she resist?”

Gabe shook his head. Elle had been more than a holiday romance, he was sure of it, and he couldn’t imagine her being swayed by a guy who could balance on a bit of wood skimming over a wave. He rubbed his left temple, which was pounding after the torturous five-hour journey from London. “I just hope we get a chance to speak on the school bus, sort this out before registration. I can’t stand not knowing what’s going on between us.”

“Oh, you’re so dramatic.” Becky rolled her eyes and smeared her pouting lips with the perfect shade of cherry gloss to complement her raven hair. “But I’m sure it’ll all work out, and if it doesn’t…” She pressed her lips in on themselves as she nodded at the Atlantic Ocean dominating the horizon. “There’s plenty more fish in the sea.”

Gabe squinted at the sun’s glare bouncing off the water like a shimmering path of diamonds.

“Really, don’t sweat it,” Becky went on with a shrug. “I’ll help you find her in the morning and if you don’t, well, at least you’ll have me to sit next to until your charm works on another unsuspecting victim.” She rooted in her bag and pulled out a half-eaten packet of Haribo. “I wish I hadn’t spent that holiday being loyal to Greg, what a complete waste of time that was. If I’d known he was messing around with that tart, Cara, whilst we were away, I’d have had some fun of my own with the group of cute boarders hanging about.” She offered Gabe three fried-egg sweets.

Gabe popped them in his mouth and glowered at the mention of Greg. He’d vehemently disliked the guy Becky had mooned over for nearly a year. He’d treated his sister like a puppy he could give attention to when the mood suited him and the rest of the time keep locked up in the yard. Gabe had kept his temper in check when the loser had finally shown up with a cheap box of chocolates, but only because Becky had begged him to stay cool. It’d been hard, though—holding on to the thin thread of his temper wasn’t Gabe’s strongest point. What he’d really wanted to do was shove the jerk against the wall and tell him where to get off, tell him he was no longer welcome within a mile of his sister. Still, at least the final breakup had made the move to Wales easier for Becky to accept, even though it meant leaving a group of good friends and her beloved drama club.

“That wasn’t there last time,” Alison, the twins’ mum, spoke up from the front passenger seat.

Gabe followed his parents’ line of sight. The dark-brown fence running parallel to the clifftop had six brand new sections of timber planking. Pale and anemic, yet to be weathered by wind and rain, they supported a dozen bunches of wilted flowers, tied on with string and wrapped in grubby Cellophane. The flowers were dead, the colors blurred into rusty browns and mossy greens, good for nothing but the compost heap. In the very center, a looping red bow sagged toward the grassy verge, surrounded by an assortment of stuffed animals and a single Welsh flag displaying a wind-ripped red dragon. It was a shrine to some poor soul’s untimely demise over the cliff and everything about it looked gloomy, depressing and utterly hopeless.

Gabe turned the other way. He couldn’t bear to look at the unseeing glass eyes of the stuffed animals, or read the scrawled words of loss attached to the dead flowers. Imagining a trip over the sheer cliff sent a shiver snaking down his spine—the height was immense and the fall severe. He knew without looking that the base was a floor of gnarled rocks, spiked and unforgiving to anyone unlucky enough to land on them.

“There it is,” Alison said in a lighter voice. “Our fabulous new back garden.”

A sweeping golden crescent of sand sprang into view between the rust-red cliffs. It was like a treasure island, empty and secluded, just waiting to be discovered.

“And wow, what a back garden,” Reg said, reaching for her hand and giving it a squeeze. “The whole of Manorbier Bay to enjoy whenever we want, right on our doorstep. Long clifftop walks, picnics, rock pooling, surfing too.” He tilted his head toward the back of the car but kept his eyes on the road. “Hey, Gabe, how’d you fancy us both getting a surfboard and catching some waves together?”

“Only so you can check out the local talent.” Gabe tutted. “That’s the only reason you want to learn to surf.”

“Nothing wrong with that. Got to make new friends somehow, haven’t I?”

“You certainly do,” Alison agreed. “How about a dog? The city was no place for a pet, but living here we could get a golden retriever or a boxer or something.”

“It would be a great excuse to walk the coastline.” Reg nodded as he shifted up a gear and headed past the sign reading Manorbier—Croeso. “At least now we’ll have the energy to do something other than work, work, work. We’ll be in control of the hours the café is open in the summer and in the winter we’ll budget and give ourselves a few months completely off. We’ll do nothing except enjoy being together, as a family.”

“It’ll be great.” Alison leaned across and kissed her husband on the cheek. “We can really start living again.”

Gabe pulled a face at Becky.

Becky jabbed her finger into her open mouth in an I’m-going-to-be-sick gesture.

But inside, Gabe was thrilled their parents were getting on so well. The stress of full-time, high-powered jobs had taken its toll on everyone over the last few years and this new, relaxed atmosphere, with no arguing and no stressing, would be much more conducive to studying.

“Is that it?” Becky asked, pointing to a thatched roof growing visible beyond a sloped meadow dotted with sheep.

“Yep, that’s our new home.” Alison rubbed her hands together and bounced on the seat. “Isn’t it fabulous?”

“The removal van has beaten us to it.” Reg pointed at the large blue van with Target Removals written in white down the side. “I’m surprised about that.”

Gabe leaned forward and gripped the back of Alison’s seat. “Well, you’re hardly Lewis Hamilton burning up the racetrack, Dad.”

“Hey, I’m a safe driver, that’s why it takes me a bit longer. Better late than never, that’s my motto. But on these narrow lanes, I’m amazed the removal van made it through at all. I’ve been worrying about that. Not only are they incredibly dangerous, these tiny roads, they’re also designed for tractors and four-wheel drives.”

The car wheels crunched onto the wide gravel driveway of Culver Cottage Café, the engine died and they came to a sudden, quiet halt next to the van.

They were all completely silent as they stared out of the car windows at the idyllic white cottage that now belonged to them.

The thick-thatched roof wound around an enormous brick chimney pot and lifted lazily, like eyebrows, over the top two windows. A small attic window jutted to the left of the chimney, both panes wide open, a forgotten net curtain flapping in the salty breeze. Over a red front door, central to the main body of the cottage, wooden pillars supported a crooked thatched porch. The door was flanked with two delicate but large leaded bay windows, one of which had a blue sign reading Closed—Ar Gau, indicating that it was the front room used for serving tea, coffee, cakes and ice cream. To the left of the cottage, a one-story extension had been added. It was also painted white and had matching windows but the roof was red tiled as opposed to thatched and it had large French doors leading onto a circular side patio.

“Look at the garden.” Alison broke the awestruck silence. “It’s even more stunning than I remembered.”

Caroline MacCallum loves stories, whether it’s reading them or writing them. Throw in a dash of paranormal, a good sprinkle of love and a lot of excitement and she’s in her element.

Gabriel’s Angel is her first YA romance and there’s more on the way.

Reviewed by Lost in Sweet Words

5 stars!!!
I have to thank the author Caroline MacCallum  for kindly providing me with a copy of her book to review.
Amazing!! I have to say I don’t read a lot of paranormal boo...

Share what you thought about Gabriel's Angel PRINT and earn reward points.