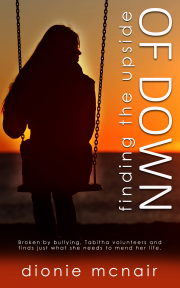 Finding the Upside of Down PRINT

Broken by bullying, Tabitha volunteers and finds just what she needs to mend her life.

Being bullied has always been part of Tabitha Cockell’s life. Since first grade her tormentor, Amelia, has hounded her with cruel taunts, name-calling and nasty rumors both face to face and online. She attempts suicide, but is saved in the nick of time by the guy she has just started dating after he reads her suicide note on Facebook.

Survival means she has to face life, but she doesn’t know how until she sees a crew of State Emergency Service volunteers at work. She finds the courage to join, and her decision soon has her seeing and understanding life from a whole new perspective.

Publisher's Note: This book has previously been published elsewhere. It has been revised and re-edited for re-release with Finch Books.

The rough, solid shove against Tabitha’s right shoulder demolished her precarious balance as she negotiated the last step. Her pile of textbooks, pencils and new tablet flew from her folded arms and splattered in an arc on the narrow landing. She reached out to save herself but her hand slipped from the rail and she crashed onto her knees with a bone-jarring thud.

“Oops, Tubby Tabby’s done a bellyflop, but then, you always were clumsy, weren’t you? Such a shame, on your first day at college and all, to make such a scene.”

Tabitha flinched at the scathing words, the scorching heat of embarrassment burning across her face as she looked up into Amelia Eckerton’s sneering expression. What the hell was she doing here? Why wasn’t she at university?

As usual, Tabitha struggled to respond to Amelia taunts, to find the words to refute her cruelty and the courage to say them out loud. As she cowered on her knees, the other students pushed past, stepping nonchalantly over her belongings or shoving them aside so they didn’t have to step on them. By the time Tabitha had gathered her composure, Amelia had disappeared down the next flight of stairs. Her knees hurt, her wrist throbbed where she had used it to break her fall and tears of embarrassment burned at the backs of her eyes. As she tried to scramble to her feet with as much dignity as possible, a hand provided support under her elbow.

Upright once more, Tabitha turned and found a dainty blonde girl by her side.

“I think so. Thank you for helping me,” she said.

“I’m Jaclyn,” the blonde girl announced as she bent down and began to gather Tabitha’s books from the floor. “Here you go,” she said as she handed over Tabitha’s things. “Good luck. I might see you round.”

“Thanks again,” Tabitha said loudly as she watched Jaclyn skip down the stairs and disappear in the milling students.

Tabitha’s positivity and mettle for her venture into campus life vanished with the helpful stranger. One cruel action of a ruthless bully had shattered her new start and brought the past rushing back with stark cruelty. The throb from her knees underpinned the tremble of shock and dismay as she clutched the handrail to steady herself. Was this year about to be a repeat of Year Twelve, where she had crumbled under the barrage of abuse from Amelia and failed to deliver the work to achieve a satisfactory score for university? Resentment flared and Tabitha stiffened her spine. No, I will not lose this too. I will not let her get to me. She consolidated her pile of books, pushed away from the handrail and made her way down the stairs.

Shock rattled through her as she struggled to regain her earlier orientation and negotiate the maze of corridors, but at last, with a sigh of relief, she slipped through the door of room two-one-nine into the half-filled classroom. With surreptitious glances, she studied her companions—a couple of girls huddled in the back corner whispered to each other, and three guys her age sat silently waiting for the lecture to start. One of them looked up as she reached a spare desk.

She looked directly at him, stunned by a flash of recognition. “My God, Alex, what are you doing here?”

“I bombed out in my second year of my vet course, didn’t work hard enough. I have to get some money together to go back so took a job at the racing stables,” he said. “Boss wants me to have some qualifications so he sent me here.”

“Wow,” Tabitha exclaimed, stunned at Alex’s failure to make the grade at university.

“So where ya been, Tabitha?” Alex asked. “You haven’t come on any of the car club cruises with your dad, and you deactivated your Facebook ages ago.”

“Yeah. Would love to have been with Dad, because he even lets me drive the car sometimes, but study and work called, and as for Facebook, I stopped using it because there was too much nastiness and shit going on.”

“Yeah, it can be like that. Anyway, Tabitha, it’s good to see you again. Maybe we should get together to study sometime,” Alex suggested.

She nodded. “That would be good, Alex.”

As Alex turned to answer a question about textbooks from one of the other students, Tabitha found a seat and prepared to begin. While she waited she glanced surreptitiously at Alex several times. She had always had a thing for him since meeting him four years ago at one of the cruises, but both fathers had made it clear Alex was too old for her.

The door opened and shut as another person arrived. Footsteps came closer. Someone leaned over her shoulder and whispered in her ear.

“Oh my goodness, fancy that, Tubby Tabby—we’re in the same class. This is good. We can get reacquainted.”

Tabitha cringed as the words cut into her soul. She struggled to hold back the burn of acid bile in her throat as her stomach contracted into a tight ball of grabbing pain. With a sense of foreboding, she glanced up at Amelia—her nemesis—then dropped her gaze back to her books. She had nothing to say.

“Did you have a good trip on the stairs, Tubby?” Amelia chuckled. “And I thought college was going to be so boring, with no one to stir.”

“You could’ve really hurt me, Amelia. Just go away, this isn’t high school and we aren’t kids anymore,” Tabitha muttered, keeping her eyes on her desk.

“Well, well, well, think you’re too good for me now, do you? Perhaps I’ll have to rectify that before you leave today, Tubby,” Amelia sneered.

“My name is Tabitha. Don’t call me that childish name,” Tabitha snapped, all her frustration and consternation at Amelia’s continuing ridicule adding sharpness to her tone.

“Awww, Tubby, don’t be like that,” Amelia admonished as she drifted to the back of the room and found a seat.

Tabitha sat stock-still, her hands clenched on the table in front of her, fighting to control the tremble. Her stomach threatened to rebel and she swallowed hard to keep it under control. Of all the people to be in her class. She wanted to run from the room and never come back, but something held her in place—a desire to complete the vet nursing certificate and get a full-time job at the local vet clinic where she now worked part-time.

Dionie was a closet writer for several years before she got brave enough to share her work with anyone, until she joined Eyre Writers Inc, a creative writing group in the seaside town of Port Lincoln and really began to improve.

Her first book was a 100,000 words family saga novel but after studying children’s literature at university she embarked on a new direction—writing a young adult fantasy novel.

After being made redundant from the job she loved in 2011 she became a carer for her frail, vision-impaired mother and turned to fulfilling her dream of becoming a writer.

When Dionie is not writing she enjoys spending time with family and friends, especially her mother and three wonderful adult children and adorable grandchildren. She also enjoys egg decorating and carving, reading of course, painting, gardening and cooking.

The author is amazing at portraying the painful suffering that Tabitha endures. The constant frustration of failed interventions, the constant worry that something will happen and the frustrating feeli...

This plot goes beyond entertaining me and poses the chance for a survivor of bullying to find comfort and encouragement.

I am very pleased that my girls have had the chance to read this book...

Share what you thought about Finding the Upside of Down PRINT and earn reward points.