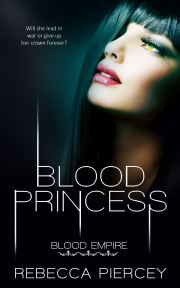 Book 1 in the Blood Empire series

Laura struggles to find the truth behind the rebellion that threatens her family’s rule as she fights to protect her country from a war that could destroy it.

Seventeen-year-old Laura White, princess of Karkonia, has been ordered to murder her older sister, Alicia.

The job should be easy enough. Laura hates Alicia for betraying their family and joining a rebellion set on usurping their father, the Emperor. Besides, Laura’s been killing at her father’s command since she was eleven.

But before Laura gets the chance to end her sister’s life, she is dragged into the mess of the rebellion by her bodyguard, Shane Kagae. As Laura and Shane uncover secrets that her father has been keeping for years, they realize that Alicia and the rebels may have been right about the Emperor all along. When their disloyalty comes to light, Laura is forced to choose between saving Shane’s life and remaining loyal to her father. She chooses Shane, and they flee the palace, Laura’s heart breaking with every step.

Will she return to her father’s side to lead the war or give up her crown forever to help the rebellion?

Reader Advisory: This book contains some scenes of violence.

I awaken to the sounds of chaos. A terrified scream pierces my sleep-clouded thoughts and adrenaline immediately pushes me to action. The first scream is shortly followed by a second and a third, and I hear guards shouting in the courtyard below my open window. Whatever is happening, screams and panic in the middle of the night are never good.

I hastily throw my covers onto the floor and grab a knife from my nightstand. I tuck it into the waistband of my leggings and pull a jacket over my shoulders. As I crack my door open and peek into the dark hallway, a shrill alarm begins sounding, echoing off the walls. I recognize the sound immediately.

The palace is under attack.

Fear creeps into my mind for a brief second but I push it away and resolve to find my brother. There’s no reason to be afraid for myself. I’m a trained assassin and I’ve survived an attack before, once, when I was eleven. Still, it’s better to remain together, so I check to make sure the hallway is clear before I silently move toward my brother’s room, which is just three doors down from my own. He’s standing in his doorway in a T-shirt and boxers, a befuddled look plastered across his face.

“Laura? Why’s there an attack drill happening at three in the morning?” He yawns, stretching his arms.

“It isn’t a drill, Eight,” I whisper, shoving him back into his room and flipping off the lights. I don’t want to draw any attention to us.

“We’re under attack,” I say, searching through my brother’s things for any weapons he may have. Recently, he’s taken to being quite the pacifist and wants to avoid any and all conflict. How unfortunate for him.

I hand him a gun and a knife, and stick the other three knives that I find into the waistband of my leggings with my own weapon. It won’t be comfortable, but they’ll stay put until I need them.

“By who?” he replies, taking the weapons from me without hesitation. I suppose training and instinct supersede pacifism. Good.

“Don’t know. If you see someone you don’t recognize, shoot first and ask questions later.”

“I don’t care. Until we know what’s going on, shoot first.”

Eight nods, a piece of his shaggy black hair falling over his ice blue eyes. My brother is tall, pale and lanky with an angular face. The two of us have similar features except I am shorter and my eyes are golden rather than blue.

“Good. Let’s go then,” I say, motioning for my brother to follow behind me.

I tiptoe down the hallway, staying close to the wall. Our palace is five stories high so attackers could be lurking anywhere. I hear the screams of our servants and the shouts of the guards, attempting to direct people to safety, coming from floors below us. Eight and I live on the fifth floor, so it’s unlikely that the attackers have gotten to us quite yet. Still, I remain on the lookout, listening for any sounds of movement nearby.

When we reach the end of the hallway I hear hurried whispers coming from around the corner. I reach back and put my hand out to stop Eight in his tracks. Without making a sound, I look around the corner and my golden eyes widen at what I find.

My sister, Alicia, has been out of Karkonia for two years, trying to work out a diplomacy contract with our neighboring country, Malibah. It is only a ruse, of course, but there’s still no reason that my sister should have returned. It’s not part of our father’s plan.

“Is that—” Eight begins to whisper, but I elbow him in the stomach before he can finish.

“Shhh.” I want to listen and I need my brother’s complete silence if I’m going to hear my sister’s soft words.

“My sister’s and brother’s rooms are at the end of the next hallway. I need you to keep them busy while I find the Emperor and kill him. If we want to stop this war, we need to do it tonight,” Alicia says to a blond man dressed all in black.

“Sister? I thought you and Prince Eight were Emperor Peter’s only children,” the man asks, confused.

I roll my eyes. I’ve grow tired of my identity being kept secret. I cannot strike fear into the hearts of those who don’t even know I exist.

I don’t wait for his response. Before the guard comes our way, I open a nearby door and shove Eight inside the room.

“When this guy comes for you, you shoot him. And don’t give me any of that ‘I’m a pacifist’ nonsense. Kill him.”

“No. I’m going after Alicia. You need to do this, Eight. If not to save yourself, do it for me,” I say, putting my hand on his shoulder. “Just stay hidden as long as you can. You only need to kill him if he finds you.”

“Okay. I’ll do it,” Eight says, drawing his gun. Satisfied with his answer, I quietly look through the cracked door. The blond enemy has made it halfway down the hall, so I slink through the small opening of the door and walk against the wall until I’ve turned the corner. I see my sister’s figure running down the hallway and I hurry after her, swiftly and silently.

I don’t understand how she could do this to us, betray us as if we weren’t even her own blood. But it’s evident to me that she has and the knowledge is heavy on my shoulders, making my heart ache. The pain pushes me to chase her harder and I carefully avoid stepping on a servant’s body as I run after her. An innocent servant who has done nothing but care for my family. The sight causes an untamable rage to course through my body, only adding to my adrenaline.

In moments, I catch up with my sister and grab her thick brown ponytail, throwing her to the ground before she has the chance to react. She turns over and pulls out a knife, but her brown eyes widen when she realizes that her attacker is me.

“Laura, let me explain,” she begs, her eyes full of horror. She knows what I am capable of. She’s seen the way I kill.

“It better be a damn good explanation,” I threaten, holding my knife to her throat. She squirms and tries to get out from underneath me but she’ll never overpower me. She may be older, but I’ve always been stronger.

Rebecca Piercey is an author of Young Adult Fantasy and Sci-Fi novels.  She grew up in Louisville, Kentucky, where she spent most of her childhood chasing butterflies during t-ball games and reading tons of books.

Now, still an avid reader, Rebecca attends the University of Louisville where she studies Fine Art and Creative Writing.

I don't usually read much in this book's genre, but something in the blurb caught my attention and I grabbed it up...the storyline read a lot more smoothly. It surprised me by having a few shocking momen...

Share what you thought about Blood Princess PRINT and earn reward points.

Other books in the Blood Empire seriesView Series Page