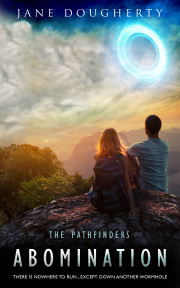 Book 1 in the The Pathfinders series

As the end of the world begins, Carla and Tully hurtle through a wormhole five years forward in time, only to find they haven’t missed the Apocalypse after all.

Carla and Tully are picnicking in the quad of their international high school in central Paris when the end of the world begins. They are sucked into a wormhole that spits them out five years later to find that the world is a freezing desolation but still hanging on, waiting for something even worse to finish it off. The something worse turns out to be the Burnt Man and his horsemen. Taken prisoner by the Flay Tribe to their lair in the ruins of a shopping mall, Tully is forced to become a warrior, while Carla joins the other girls as a kitchen slave and comfort woman.

Tully might like the idea of playing soldiers, but Carla knows what is waiting for the girls when the food runs out, and it isn’t pleasant. The supermarket holy man’s vision of the return of the Burnt Man and his demon friends drags Tully back to reality. When the four fiends are reunited, the Apocalypse will really begin. Carla and Tully don’t plan on being there when that happens.

But in this post-Abomination world where only the young and brutal have survived, where food and fuel are running out and the climate is plunging into another final ice age, there is nowhere to run—except down another wormhole, with no idea of what might be waiting for them at the other end.

Tully raked his fingers through his thick black hair, an expression of disgust on his face. Even his head was sweating! The window blinds stuck out like stubby black wings, keeping off the glare, but doing nothing to prevent the scorching heat radiating up from the bare asphalt outside the building. The air throbbed with the same rhythm as the whirring fan on the teacher’s desk. Teacher? Yeah, right, he was in school. He almost remembered it was a physics class, but it was too tiring to drag out the information, so he let it fall back into the pit of magma that the heat had made of his brain.

A crash and the sound of brittle laughter from the building site of the new sports complex nudged at his attention. Men in hardhats wiped streams of sweat from their faces and glared up at the searing brilliance of the sky before scuttling into the relative cool of their portacabins for lunch. The crane operator had already knocked off, and the metal monster was still, steel against pewter, pulsing in the dull heat.

Tully shifted in his chair as an oppressive feeling formed and squirmed in the pit of his stomach. Had he forgotten something important? Homework? Had he locked one of the cats in his room? Couldn’t remember—too damn hot. His unease focused on the silent metallic struts of the crane that hung practically overhead, like a giant predator, waiting.

The interminable lesson ended, and Tully rocked back in his chair, stretching arms and legs. A pen jabbed him in the back. He winced and turned his head. Carla grinned at him from the desk behind, and the nagging unease in his gut curled up and went to sleep.

“You are awake then. I couldn’t decide if you were asleep or you’d had a stroke.”

“Whose warped brain did it come out of anyway, the idea to have classes on a Saturday morning?” he asked, stifling a yawn.

Together they walked out onto the quadrangle, the rather pretentious name given to the tree-bordered lawn that formed the geographical center of the school. The heat hit them like a blast from a baker’s oven as soon as the doors slid open.

Tully cringed. “We could stay inside.”

“Traditionally, it’s not like the Gobi Desert out here,” Tully muttered, wiping sweat from his forehead with the back of his hand. “Honestly, though, this weather is getting weirder. Don’t you think?” He looked at Carla. “It isn’t just me, is it? I mean, you remember summers that were just sorta normal hot, don’t you? There’s something funny going on. Something they’re not telling us.”

Carla raised an amused eyebrow again. “They? Is this one of your conspiracy theories?”

“Yeah, how about this one—all those billions of Chinese leaping about for the New Year celebrations have knocked the world off its axis, and we’re falling into the sun?”

“It could just be a global conspiracy of soda manufacturers to boost sales,” Carla said brightly.

Tully grinned back. Carla was probably right. She usually was. Usually.

The lawn of the quadrangle was as brown and dry as a Middle Eastern hillside after a tribe of desert nomads had pastured their goats on it. Groups of students picnicked in the shade of the wilted plane trees that cast welcome shadows and shed a faint leafy odor that was almost healthy, unlike the less attractive city smells of car exhaust and junk food.

Sitting with his back resting more or less comfortably against a mottled tree trunk, Tully unwrapped his lunch. He spread the greaseproof paper package on the grass and, with a soft sigh that was mainly affection and only a tiny bit exasperation, picked up the large wedge of leek quiche. As he flicked his dark hair out of his eyes, he caught Carla looking at him. She grinned. She was always grinning. Tully had never met anyone else of such unflappable good humor.

Carla laughed. “Are you sure that’s your lunch you picked up and not something your dad was planning to fix the bathroom ceiling with?”

Tully pretended to inspect the quiche suspiciously. “Now you mention it, I think it might be part of his relief model of the Paris Basin,” he said sarcastically. “But what the hell? I’m hungry enough to eat his Taj Mahal made out of matchsticks or his life size reconstruction of Champion the Wonder Horse.” He took a large bite—too large—and chewed energetically.

“I’m sorry.” Carla touched his hand contritely, and Tully forgave the grin she couldn’t quite suppress. “I know you don’t like people poking fun at your dad. I love him too. He’s one of the best. But even you can’t pretend he can cook, and don’t be so spiky.”

Carla had put on her most beguiling expression. Her whole face, chestnut hair, golden skin, teeth and bright eyes glowed. Tully could almost hear her purring.

“Prickly then. If you give me a piece of that quiche, I’ll share this focaccia with you. Gabriella made a ton of it yesterday in a fit of homesickness, and she’ll be mortally offended if there’s any left by the weekend.”

“As long as you’ve got a good dentist.” Tully broke off a chunk of pastry, and rounds of undercooked leek detached themselves and dropped into the grass. “I think a couple of my premolars have come loose. Sausages he can manage, but Dad’s pastry is the ultimate deterrent. ”

They both laughed, thinking of Jack, Tully’s big, easygoing father, who never wore anything smarter than his best jeans and a clean T-shirt, with his massive hands and farm worker’s arms, his bright blue eyes and dark hair, grizzled at the temples. He imagined him in the untidy kitchen, throwing flour and butter about, searching for the salt, swearing when there weren’t enough eggs.

Tully’s house, four stone walls and red tiled roof, forgotten by time and the developers, sat in a patch of wasteland between industrial estates and sterile farmland. The center of a ramshackle assembly of barns and outhouses, it was the heart of the Community.

Tully didn’t remember life before the Community, like he didn’t remember his mother except as a fuzzy warm presence. When she’d died, his dad hadn’t been able to bear the constant reminders of her—in the house, the walks they took together, the shops, the town, even the language. When a lorry driver friend had told him about this community of Hairies outside Paris, unreconstructed hippies living on a vacant lot with their own generator, their goats and their allotments, Tully’s dad was all ears. These were people who spoke a language his Molly had never uttered, in a country they had never visited, living a life on the edges of everything they had known together.

It didn’t take long for him to pack up little Tully and everything useful, stick it in a van and leave Liverpool, England, and the ghost of Molly behind. A farm worker’s cottage with a roof that was still intact became Tully’s home. In winter, there was a fire in the hearth and icicles on the bedroom windows. In summer the doors stood open, and cats and the hot breeze drifted in and out.

Tully was going to his fancy international school to learn how to be a Very Important Person and save the planet. Jack was doing his bit in the Community to at least destroy as little of it as possible, to make himself as innocuous and discreet as a squirrel, or a cricket, or a barn owl.

Tully could have made that last observation aloud and Carla would have understood, like she understood Euclid and German. She understood him so well. Tully only felt complete when he had his arms around her, her head nestled in the crook of his arm, her hair tickling his chin. In his dad’s favorite cinema that smelled of stale popcorn, feet and a century of dust, she made him feel like the strong, silent hero in old Gary Cooper films. With her slender, almost angular, frame and elfin features, she seemed fragile, vulnerable, but like the wasp-waisted cowgirls, she was really tough as old boots.

“Fancy the cinema this afternoon? The Champo’s showing Casablanca. Again.”

Carla grimaced. “Not in this heat. I don’t know why the owners of that place think you can’t watch an old film without the authentic atmosphere too—sweaty armpits and hair lacquer.”

Tully sighed. “I’m not going around the shops.”

“Let’s just go for a walk in the woods.”

Jane Dougherty writes stories where the magical and the apocalyptic mesh, where horror and romance meet, and the real and the imaginary cohabit on the same page.

Jane was born and grew to her present height in Yorkshire then was dragged into the sleazy underbelly of existence--work--in London. Even though it involved drinking lots of wine and getting paid for it, she rebelled. She escaped to Paris, fell under a powerful enchantment and has been wandering from French pillar to French post ever since. In the strange world she inhabits, she writes the rules, creates the landscapes, the people and the magic. She also bends the rules of physics, plays Cupid and hands out happy endings to deserving characters.

This book reminded me of Lord of the Flies; it had that same sinister atmosphere. It’s unnerving to see how brutal our sweet, precious children can become when left to their own devices in a dead...

The author adds great description and paints a clear picture for the reader to understand how the...

Share what you thought about Abomination PRINT and earn reward points.

Other books in the The Pathfinders seriesView Series Page